Understanding your Certificate of Analysis

After your product is tested you will receive a Certificate of Analysis. 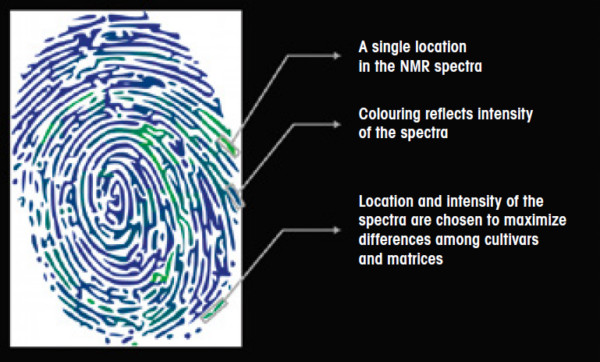 A confidence interval (CI) is a measurement of the variation in the metabolite profile of the registered cultivar or product for a specific product matrix. 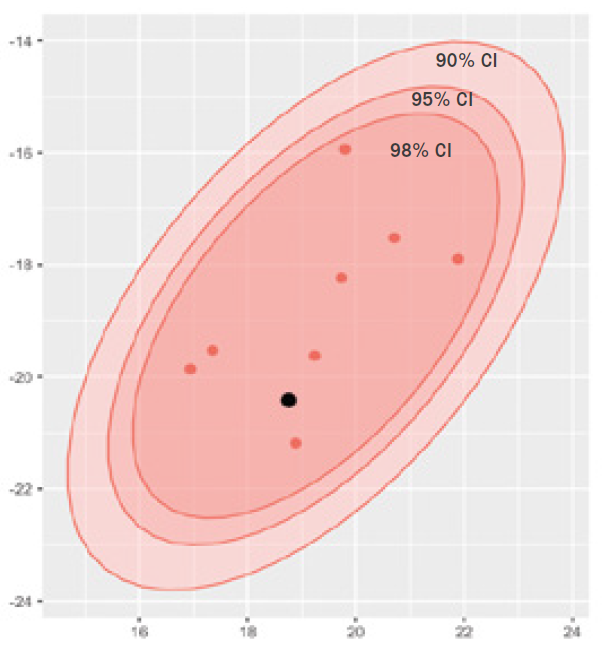 The ordination diagram shows the principal components of a metabolite profile, which can then be measured using multivariate statistics.

In this pink circle, we observe the relationship between a mother plant (black dot) and eight of its clone plants (pink dots). In this instance, all clone plants are within a 98% confidence interval of their mother, indicating a variation in the metabolite profile of no more than 2%.

How do we assay SNPs?

We examine SNPs in individual genomes. As Cannabis is diploid (i.e., has two copies of each chromosome) there are two possible states for a SNP: the bases on each chromosome are the same (e.g., AA or CC); or the two bases are different (e.g., AC, GT). Most SNPs are categorized as biallelic, which means we have only ever observed 2 of the 4 possible nucleotides at that position in the genome (e.g., A and C, A and G, etc). In the case of biallelic SNPs, we have three possible combination of nucleotides, which we call genotypes. For example, at a SNP for which we have only ever observed A and C, we can have AA, AC, and CC. When the SNP has a genotype where both alleles are equal (e.g., AA) we call that a homozygote, and when the SNP has a genotype where the alleles are different (e.g., AC) we call that a heterozygote. The assay we deploy simultaneously queries thousands of positions/SNPs in the genome to ascertain what is the state of each SNP in a sample’s genome. There are four possible outcomes for each SNP, it can result in a heterozygote genotype (the individual is having distinct nucleotides at that position in the genome), it can result in one of two homozygote genotypes (the individual has the same base at both chromosomes at that position), and finally, the assay might fail at that locus.

The number of SNPs (markers) that are on the Lighthouse Genomics chip and that are measured/sequenced.

The number of markers analyzed after filters have been applied.

The percentage of SNPs in which a confident genotype was called for a sample. At a locus where a call could not be made, that means there was no binding to the template DNA, the probes failed, the DNA was too low quality, or that locus wasn’t present in the sample.

A measure of the level of inbreeding of a sample. It ranges from 0 to 1. It is the probability that two alleles at any locus are identical by descendent. More clearly the probability that, if the individual is AA at a locus, that both alleles came from the same chromosome from an ancestor. For example, we can imagine that an individual is Aa at a locus, they transmit the A to two of their offspring, the two offspring then mate, and each contributes their copy of the original A to an offspring, thus the offspring is AA. In this case, the two alleles originated from the same chromosome in the grandparent and are thus identical by descent.

his is a Principal Component Analysis (PCA) plot of the genomic data for your samples and Lighthouse Genomics’ curated reference population. PCA is a method of reducing highly dimensional data, such as SNP data, into 2 or 3 dimensions for visualization. Across the first principal component we have the axis of largest variation, the second principal component is the second axis with most variation, etc. Samples that are genetically similar will fall close to each other in the PCA, and those that are distinct will be further apart. Samples from clones are expected to fall at the same location on the PCA which is why there may only be 1 or 2 coloured points on the plot.

This is a plot showing the magnitude of Identity by State (IBS) when comparing your sample against a set of reference cultivars of known types. IBS is a measurement of the ratio of SNPs that two cultivars share in a common state. IBS varies from 0 to 1, with 0 meaning all loci are at distinct states between the two samples, and 1 meaning that all loci have the same state between two samples. When examining a large number of SNPs, the higher the IBS (the closer to 1) the more likely the two samples are closely related or clones. This plot does not specify what the sample’s type is, or any other classification of the sample.

Get free technical updates and advice

Join CAPS to find out how to enhance your brand authenticity, purity and trust.